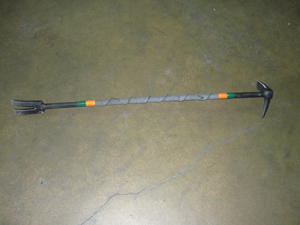 So what is “the Lincoln Bar” that is carried on Tower 33 and where did it come from? Well, the birth of the Lincoln Bar actually took place back in the early 1980s in the FDNY’s Rescue Company 2 in Brooklyn, better know as “The Boro of Fire.” The originator was actually Glenn Harris of Rescue 2 and his idea was simple – he took two Halligan bars, cut off the fork end of one, the adz end of the other and welded the two pieces together. When combined, essentially what you ended up with is a 54″ Halligan bar.

The uses were endless BUT you had to be a weightlifter to use the tool because when Glenn had the two pieces welded together, he had a sleeve added to cover the weld and it added a considerable amount of weight to the tool. But it was great for pulling ceilings, especially tin ceilings; it gave a huge amount of leverage IF you had the room to force a tough door in the “PJs” (the Brooklyn project buildings like the Albany Houses on Bergen Street right down the block from the new quarters of Rescue 2). In fact, some guys liked to carry the Harris Tool instead of the 6′ wooden hook when they carried the can if Rescue 2 was “first due” in the projects – the thinking being “what am I going to do with a 6′ hook in the projects – no ceilings to pull!!! The Harris Tool was also good on the roof when prying roof boards after a roof had been cut or when prying up a tough scuttle cover.

Well, that’s the background on the tool – now where does Lincoln Quappe come into the picture. Well, many years ago (back in the “War Years” of the late 1960s and early 1970s), the FDNY was loaded with what I termed a lot of “colorful characters”. Over the years, the FDNY lost a lot of these color characters through attrition and it was something that I always missed.

Well, Lincoln Quappe was a “throwback” to those years – he was our modern day answer to the colorful characters that our job so sorely missed. Lincoln came to Rescue 2 after fine tuning his skills at Ladder 123, right in our own backyard; and one thing became evident about Lincoln right away – he loved to “putter” and “tinker” around the firehouse.

He loved to take things apart and see what made them tick. He loved to test new tools to ensure that they were actually “fireman proof.” But one of his greatest loves was to weld. In fact, the workshop at Rescue 2 became known as “Jackass Fabrications” (better known as “JAF”) because of all of the things that Lincoln fashioned out of scraps. No one that worked with Lincoln will ever forget his rendition or should I say “collection” of Barnyard Animals….these creations were some of the best works of JAF.

Anyway, I asked Lincoln to fashion one of the Harris Tools for me for Tower 33 in his spare time and he obliged. But being the master creator that he was, he managed to make the weld strong enough so that the sleeve and consequently, the additional weight were eliminated. He made a great grip out of rubber Con Edison tape and Tower 33 was the proud owner of a second generation Harris Tool – minus the additional weight and they coined it “The Lincoln Bar.”

And then, on 9-11, Lincoln was unceremoniously ripped away from us at Rescue 2 along with six of his other Rescue 2 brothers, the victims of the bombing and collapse of the WTC. We took a big hit that day but losing Lincoln was one of the toughest losses of all.
He was true “character” in very sense of the word – he had an incredible sense of humor, he was always involved in some sort of kitchen prank. He was a terrific firefighter – he was probably one of the most tenacious firefighters that I ever had the pleasure of working with at Rescue 2.